When Benjamin Moore makes over 150 different shades of white, how is it possible to see the difference from one swatch to the next?  Moreover, how do you choose a color with so many possibilities?

Selecting white for the walls can be far from dull, and seems to be a lasting trend most designers use to showcase furniture and art.  White, when applied to the furniture or floors brightens a room and creates the feeling of a larger space. White is extremely versatile.  It works with any style, period or architectural interior. Bright whites work well to open up a space, such as those with undertones of blue and purple, while warm whites with undertones of brown and yellow tend to soften and give a sense of comfort and ease.

White also can instantly transform almost any piece of furniture. Period antiques look ideal in muted whites, while modern pieces can look sensational in brighter whites.  White can be the ideal tool for a designer.

20 seasoned designers spill what brands of whites work best, where to use it, and the tricks they have learned over the years for ceilings, walls and furniture.  Many magazines such as Elle Decor, Home Beautiful ,Canadian House & Home, One Kings Lane have each asked some of the best designers to reveal their go-to-shades for their designer interiors, here are my favorite designer tips:

20 Designers Reveal The Whites They Use

“I rarely use plain white on ceilings because the contrast is too stark, especially if you’re using saturated color on the walls.  My technique is to find a white that has   the slightest bit of the wall color in it. This has some blue and green and gray, which means it works well with those colors.  Your eye doesn’t immediately go to the ceiling, which makes that transition smoother.” Designer, Natalie Umbert

” Don’t be afraid of pure white. People have a tendency to think it’s harsh, so they add a little blue or a little ochre, but pure white is really beautiful. The thing about mixing different whites is that they shouldn’t be just a little different: You should be able to see that the difference is intentional. I love ivory- or bone-colored fabrics with white walls.” –Abigail Turin, Designer

“It’s going to blow your mind, but I think it’s white. This became painfully clear to me when I did my apartment in New York. I’m on the 42nd floor with cream marble floors and a lot of windows. I wanted a great white to show off my art and I thought, This will be easy, I’ve certainly done this before! But white after white didn’t work. I ended up opening 25 cans and painting 4-inch-by-12-inch swatches of every one of them! Each was so different, and they changed with the weather and by the hour. I was shocked. Only one was perfect. Which one? I can’t possibly remember.” Nancy Corzine

-White feels warmer when it has pink or yellow undertones. “Warm whites soften areas and add a sense of comfort.” -Elle Decor

China White, By Benajmin Moore “It seldom fails me, no matter where in the country I use it. It doesn’t break green or pink, even in strange San Francisco light. When held up against pure white it has an off-white or greige appearance, but on its own, it holds up as true white—but with a little more body. And make sure you get it in low-VOC or no-VOC.”  Eric Cohler

“I love using all white accessories in a colorful room.  I once did a wall of bookcases with only alabaster objects.  It was fantastic!” Designer  Jay Jeffers

“White brings a sense of clarity and soothes the mind. I particularly enjoy it in residential bathrooms for its calming effects.” -Shelly Handman, Designer.

Honeymilk, 7003-4 By Valspar “Getting white paint right can be a daunting proposition. Your best bet is a kinder, warmer white that has just a hint of gray or beige in it. Honeymilk is a soft white that’s great for walls. I’ve used it in a gazillion rooms and have never been disappointed.” Elaine Griffin

“Just ask any woman who’s tried to match her off-white shoes with her purse. When selecting whites, keep them in the same color family; this includes yellow-white, pink-white or bright white. View whites by placing other materials that are in the color scheme next to them, as they influence the white’s color. White is typically the last color to be introduced to the color scheme.” Color Expert, Denise Turner

Lily of the Vally 905 By Benjamin Moore “I found this color more than 20 years ago when I wanted a really great, warm white for trim, and it has been my standby ever since. It works well in rooms that get a lot of light and also in those that need it. I especially love this color for kitchens because it is warmer than your typical kitchen white.”-Alessandra Branca

Decorator’s White, CC-20, Benjamin Moore “I love this white for ceilings and woodwork, or in any room where I want a bright, clean white. It works well in all applications and with every kind of light source. Some whites can be cold and slightly blue, while others can have a creamy, yellow tone, but Decorator’s White is a true white that is both warm and modern. It’s been my go-to paint for years.” – Jeff Andrews

Pointing, No. 2003, Farrow & Ball  “It is the perfect ivory for almost every setting—not too bright and not too creamy. We’re all about striking that balance. It’s proven itself in both a sun-drenched farmhouse living room and a one-windowed New York City bedroom. It always provides a clean backdrop for showcasing colorful artwork or furniture.”- Tilton Fenwick

“My fave shade of white is Benjamin Moore “White Dove”-it’s warm but not too yellow, not too gray. Looks great in oil-based high gloss on trim!” -Nick Olsen

“Painting the walls, moldings, trim and ceiling in different shades of white adds depth and a hint of character to an otherwise basic paint job. We start with “White Dove” on the walls, because of all the different shades, this white isn’t warm or cool, grey or yellow, historical or too new – it’s just right. -Ellie Cullman

“When I worked at Parish-Hadley, Albert often suggested putting a little pink in the white of a   ceiling to make it more of a flesh tone.  It just sortof blushes, and the  reflection  is  more  flattering.  You could heighten the effect by lacquering it to add depth.” -Designer Thomas Jayne

White Wisp, OC-054, Benjamin Moore “It’s a tinted white with a hint of gray-green, but it reads as bright white. I like to use it on the trim trim for cool-colored walls. I use quite a bit of wall coverings in hemp cloth and other natural materials. White Wisp as a trim makes many of these papers look crisp.” Frank Roop

“My favorite shade, hands down is “Gardenia” by Dunn Edwards. I love how the color manages to be creamy and rich but still read as a crisp white. It is my go to for a fresh, clean look.” – Molly Leutkemeyer

Huntington White, DC-02, Benjamin Moore “I discovered my favorite, Huntington White, through much trial and error while working on my line of paint for Benjamin Moore—debuting this October. It’s pleasingly chameleon-like. It saturates and radiates consistently, where many whites are inconsistent and change appearance during different times of day. It’s a very warm white, which I like to use in modern settings.” – Darryl Carter

Linen White by Benjamin Moore “The creamy undertones of Linen White can help add a glow and warmth to a space. It looks especially beautiful at night in a room full of lit candles. Often I also like to mix a blend of 50% Linen White and 50% Decorator White; it’s sort of a design secret that has been used for years.” -Grant Gibson

Ivory White by Benjamin Moore “Believe me, I have made every white error you can imagine, but I love using Benjamin Moore’s Ivory White everywhere. My favorite place to use it is on the floor because it lights up the house like a lantern!”- Ruthie Sommers

“White Dove, Benjamin Moore is the perfect shade of white….not too yellow, not too blue. If we had a “signature trim color” this would be it!” -Jesse Carrier 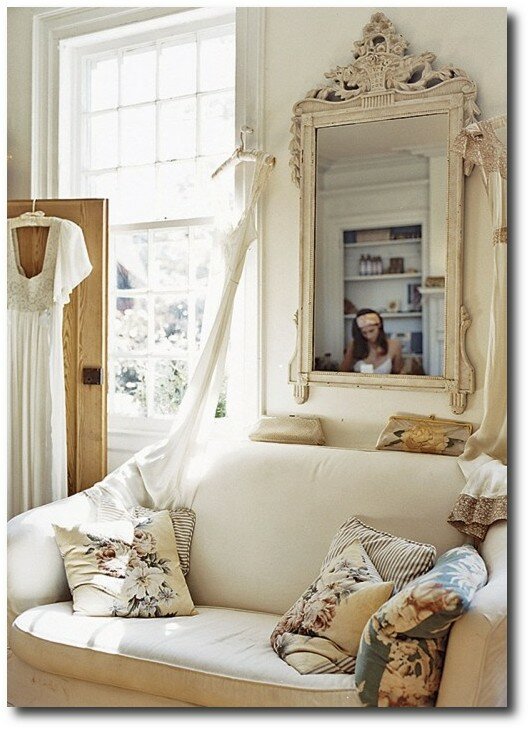 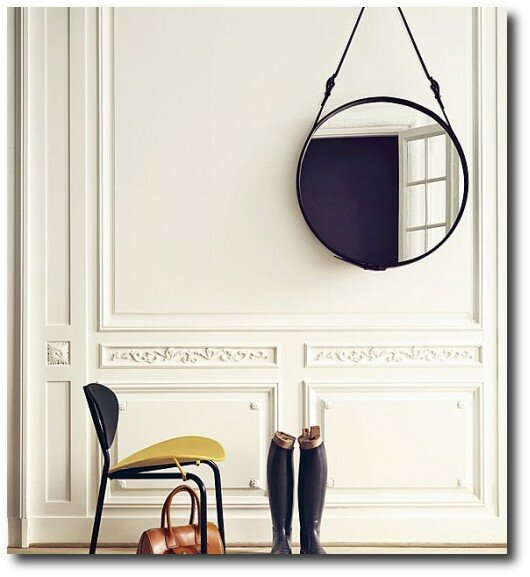 Warm Whites- Walls -Slipper Satin, Cabinets, -Pointing (No. 2003), with the skirting boards painted in Lime White all from Farrow & Ball

Warm Whites- Sico’s Japanese Paper (6195-21) has a warm and creamy tone that sets off the depth of deep woods and natural textures. Soft, subtle, and equally at home in bedrooms or living rooms, it’s become one of Sico’s most popular shades.

Country Kitchen by William B. Litchfield

Featured in This Old House