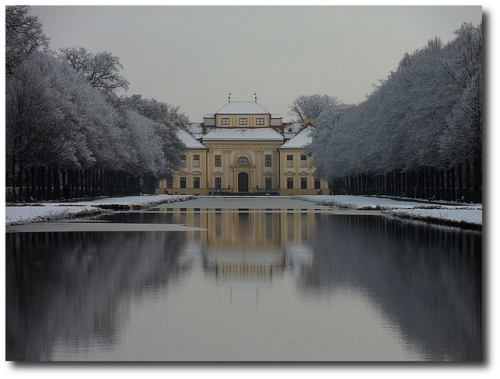 Elector Max Emanuel, who was hoping to become the next emperor, had the New Palace built as his future residence. The four-wing complex began in the winter of 1700/01 under the the court architect Henrico Zuccalli. Sadly, the outcome of the Spanish War of Succession forced Max Emanuel into exile in 1704 which brought the building work to a halt. It was not until the elector returned from his Paris exile in 1715 that the work could be resumed. Because of the financial situation in the country, the original plan was simplified. With money running extremely short, there was to be no lack of splendour at Schleissheim.

On the death of Max Emanuel at the end of February 1726, the palace complex had not yet been completed, but most of the main building was finished. Many of the rooms were incomplete and the missing fixtures such as fireplaces, wall coverings, paneling and flooring were only gradually installed afterwards by Max Emanuel’s son and successor, Karl Albrecht (reigned 1726-45). By the end of the 18th century, the palace was access-able to the public. In 2001, 300 years after the foundation stone of the New Palace was laid, this unique baroque gallery was reopened with a new layout after comprehensive restoration work.

Joseph Effner was monumental in the construction and supervised the entire building process. The outstanding interiors of the halls and state apartments are all of his work.

Important artists from Italy, France and Bavaria – such as the sculptors Giuseppe Volpini and Wilhelm de Groff, the stucco-workers Johann Baptist Zimmermann and Charles Dubut and the ornamental metalworker Antoine Motté – worked together on the decoration of the rooms, with Max Emanuel’s fame as a triumphant general as the overall theme.

The rooms contain outstanding furniture that are magnificently carved. In particular the gilt console tables are from the court workshop of Johann Adam Pichler. The ceiling paintings are the main features of the interior. Jacopo Amigoni artist, achieved the massive task of painting all the ceilings in the two main apartments and the ceilings of the two halls on the first floor, the Large Hall and the Victory Hall.

Take the virtual tour of this palace at the official website 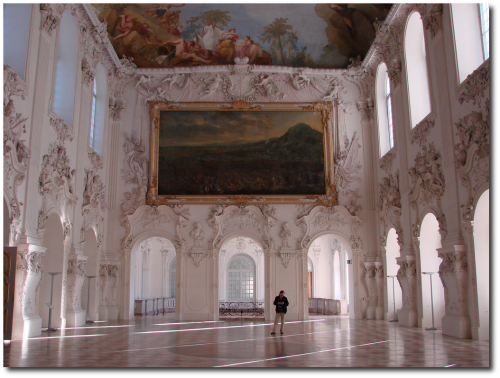 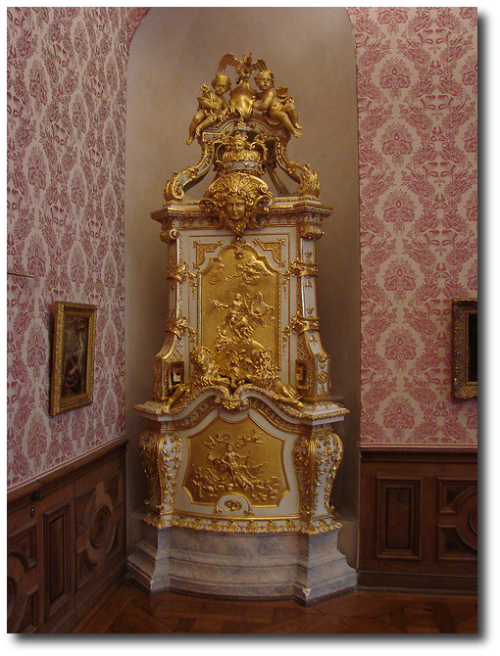 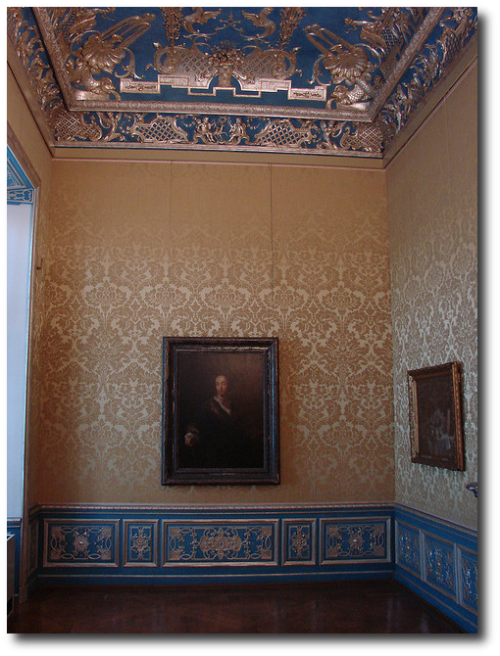 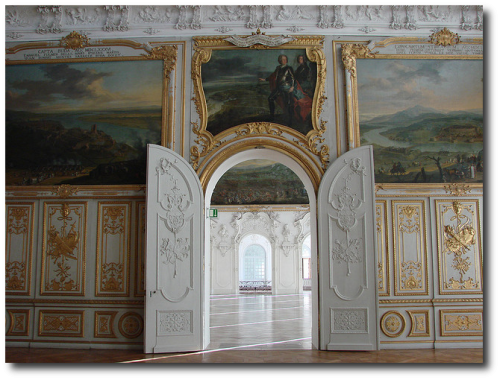 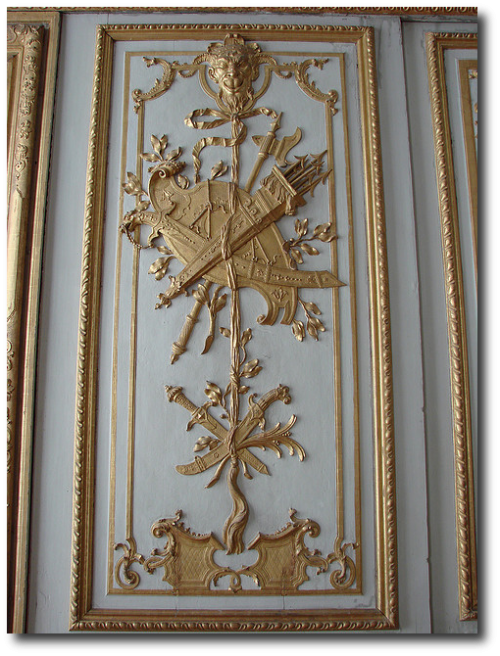 The outstanding stucco-work decoration in the mature rococo style with herons spouting water and musical instruments was produced by Franz Xaver Feichtmayr from designs by François Cuvilliés the Elder. 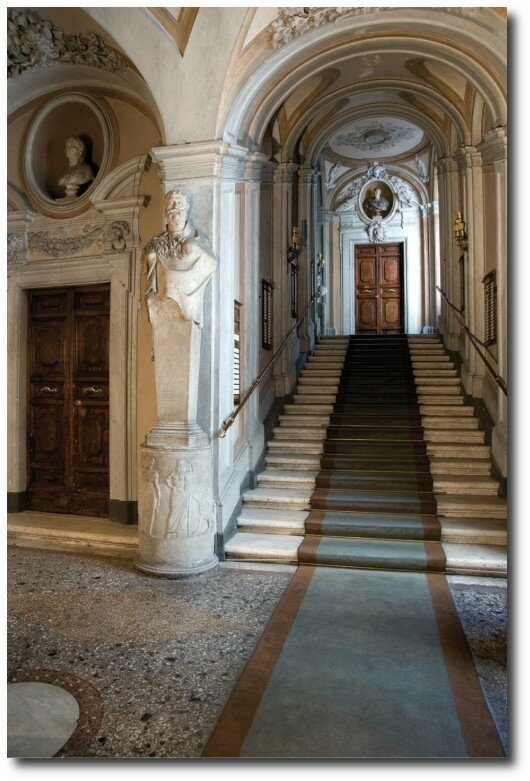 The Palazzo Rondinini was a family that was apart of the Roman aristocracy. In 1744 Marquis Giuseppe Rondinini bought a small palace which had belonged to Cavalier d’Arpino; a famous painter.

Rondinini had gathered an important collection of antiquities and decided to enlarge his new property which properly displayed his valuable collection. The palace was designed by Alessandro Dori. The walls of the courtyard were decorated with inscriptions and small reliefs, while the finest pieces were placed in the rooms of the palace where he entertained his guests.

Siena Free discusses the presentation of the book “The Marble Palace of the Ancient Rondinini”,by Daniela Candilio Bertinetti and Marina in the setting of Palazzo Rondanini in Rome. The volume is a valuable catalog, made by Banca Monte dei Paschi di Siena, in agreement with the Superintendence for Archaeological Heritage of Rome, which details the collections in the marble palace. The building reveals the aesthetic taste of ancient owner, the Marquis Giuseppe Rondinini (1725-1801)

The Augustusburg and Falkenlust palaces is a historical building complex in Brühl, North Rhine-Westphalia, Germany. The palaces were built at the beginning of the 18th century by the Archbishop-Elector of Cologne, Clemens August of Bavaria of the Wittelsbach family.

“Just a short walk from Augustusburg Palace on the edge of a small secluded forest is the delightful Falkenlust hunting lodge. Built in a relatively short time, between 1729 and 1737, it is one of the most intimate and exquisite creations of the German rococo era. The archbishop came here to indulge his passion for falconry and, after a thrilling day of hunting, members of the court would gather here for supper and games. If you are more passionate about music than falconry, you should ideally visit Augustusburg Palace between May and August when the Brühl palace concerts take place”  germany.travel 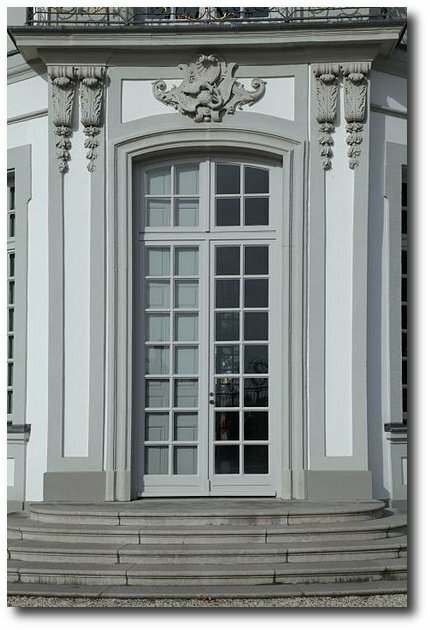 Bedroom Of The Princess Esterháza Wikimedia

Esterháza is a palace in Fertőd, Hungary, built by Prince Nikolaus Esterházy. Nikolaus Esterhazy began his plans for a new palace after he became prince in 1762.  The first architect to work on the project was Johann Ferdinand Mödlhammer, succeeded in 1765 by Melchior Hefele.

While the palace is often compared to Versailles, which the Prince had visited in 1767, however it has been said that Schönbrunn palace in Vienna was more an influence when it came to it’s architectural design.  Nearly 11 million golden forints, the Palace of Eszterháza in its full luxury was completed in 1766.

Construction on the palace continued for many years. The opera house was completed in 1768, the marionette theater in 1773.  The palace has 126 rooms, the library holds almost 22,000 volumes, while the largest room is the grotto-like Sala Terrana which was inspired by the Italianate style, showing dancing Angels who hold wreaths of flowers in the shape of an ‘E’. 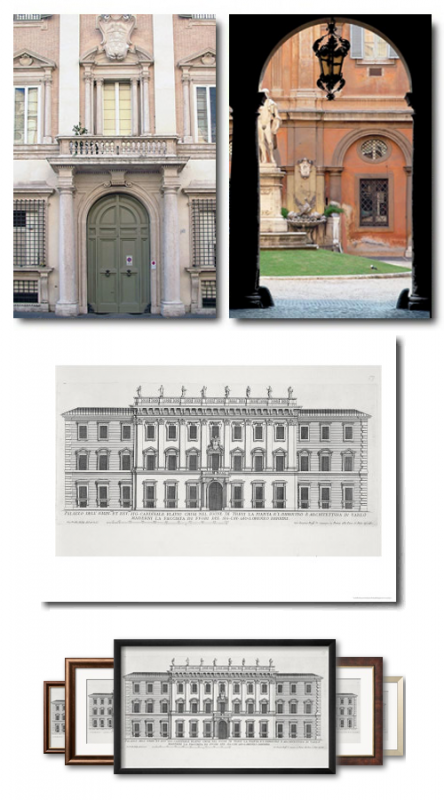 View of the Facade of Palazzo Chigi, Rome, – All Posters.ie

Palazzo Chigi-Odescalchi Castle is a building in Rome , located in Piazza Santi Apostoli . The original building was redesigned by Carlo Maderno , belonged to the family Colonna , who in 1622 sold it to the Ludovisi , and then buy it back a few years later.

In 1661 the building, which was sold in to Cardinal Flavio Chigi.   In 1745 the property passed to Prince Baldassare Odescalchi and then was expanded by Nicola Salvi and Luigi Vanvitelli . In 1887 the building was damaged by fire.

The original part of the building, whose seventeenth-century facade, designed by Bernini served as inspiration for a number of other buildings.   Bernini, presented this design again in his project for the facade of the Louvre , which was never realized. This project was later the basis for important projects such as the Royal Palace of Stockholm designed by Nicodemus Tessin the Younger , who studied at the studio of Bernini.

1623 Nicholas Ventura, On behalf of Cardinal Ludovisi, realizes the fresco on the main floor with Cybele on wagon pulled by lions.

1664 – 1668, Carlo Fontana, collaborated in developing the project’s master Bernini, turning quick sketches into drawings suitable to be presented to the client and to be used during construction, directed the construction site and carried out the enterprise.

1665 – 1667, Carlo Fontana, Transformed Bernini’s sketches into drawings suitable to be presented to the client and used during construction. He directed the construction site and carried out the enterprise.

1745 Nicola Salvi, Extension of the facade of the building and removing the garden on the right and made ​​the second door on the square, with the cooperation of the student Vanvitelli. 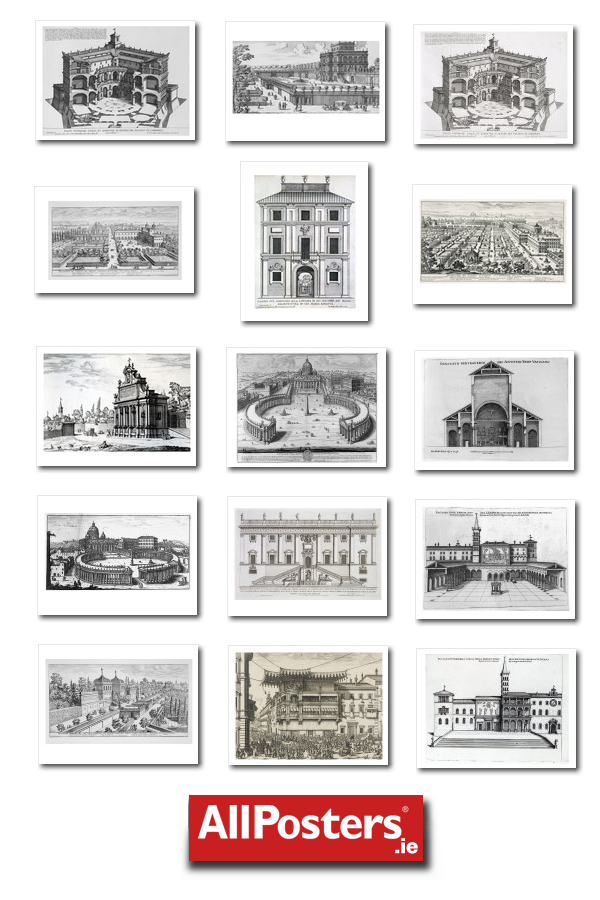