Designer Lorenzo Castillo’s Madrid home was featured in the Elle Decor’s April 2012 Issue, and it still has everyone talking. Lorenzo Castillo, a Spanish designer stumbles upon a 17th century building that romances his imaginations so much, …that two days later, he buys the place and moves in. That was 10 years ago, and since then, he has moved into a bigger space in the same building, which was featured in Elle Decor magazine.  His first apartment was sold, along with the collection of furniture and art which was used to renovate the 11,000-square-foot space downstairs apartment spread over two floors.

In fact, the building itself was one of the most prestigious addresses in the Spanish capital during the 18th and 19th centuries. Elle Decor reveals that when the Spanish Civil War ended in 1939, the rooms of this home (which is now his) was used to store the city’s theatrical costumers for the nearby Royal Opera House. Over the years the signature architectural detailsin the apartment were gone, sold off or stolen through the war. Large pieces of the decorative stucco moldings disintegrated, which meant he was in for more than a “project”.

More than quick fixes, Castillo wanted the genuine look back. He contacted the costume company’s former owner, who enlightened him with the memories of the apartment’s original grand appearance. It took Castillo more than a year travelling through Europe to find period appropriate floors, fireplaces, and hardware. He restored much of the architectural details and decorated the rooms with antiques that Castillo found on his travels around the world, and when he was an antique dealer. Some of the antiques he features in his home are from the French Second Empire, 19th-century Swedish antiques, and 1950s Italian furniture.

Castillo is well known interior designer in Spain, with sensational taste in fine furnishings and an eye for leading design. Now he runs his own interior design business, with assistance from his partner, Alfonso Reyero. 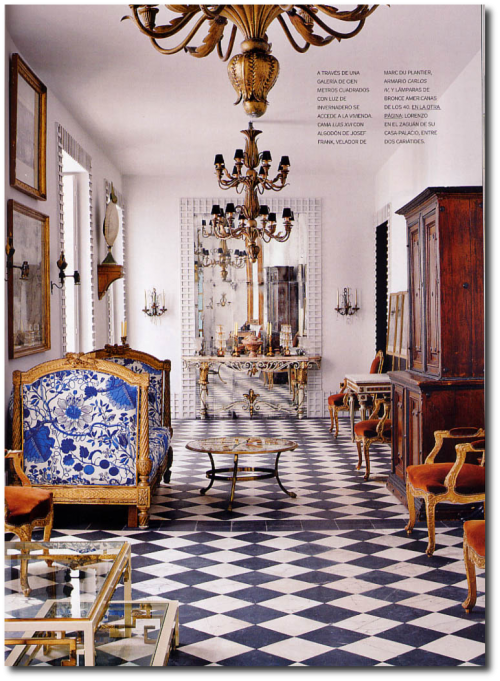 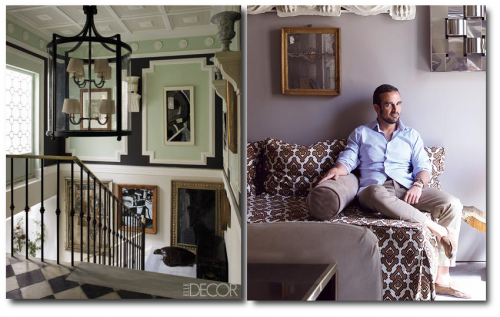 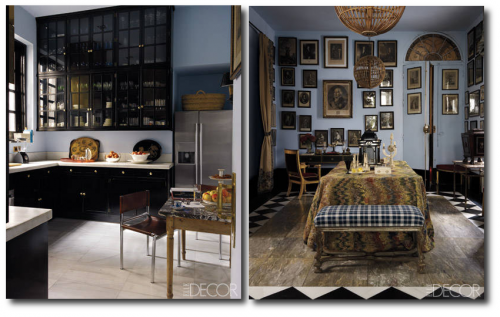 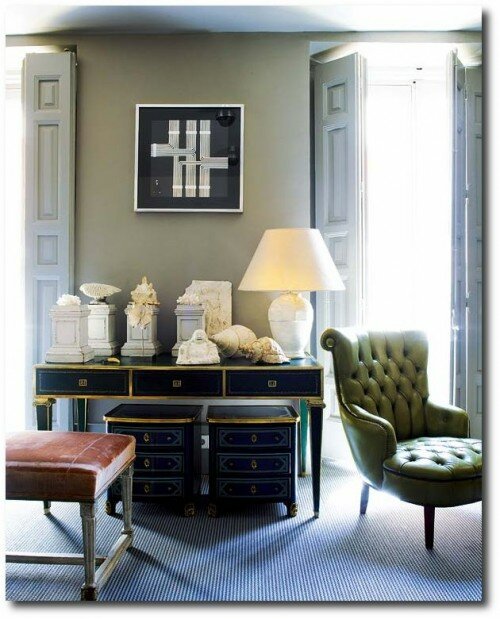 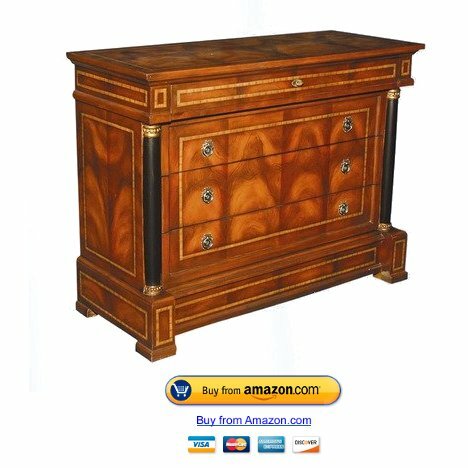 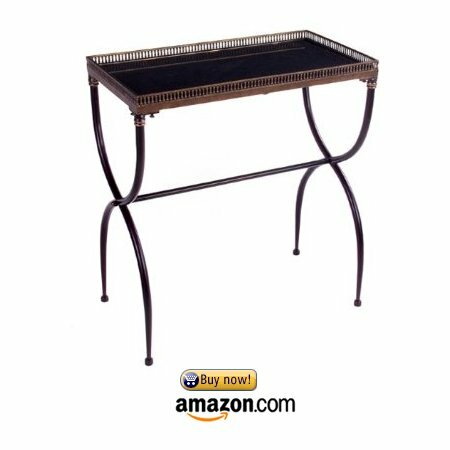 Enhance this Wrought Iron Table, that sells for $106 with a rectagular white marble insert. There you go! 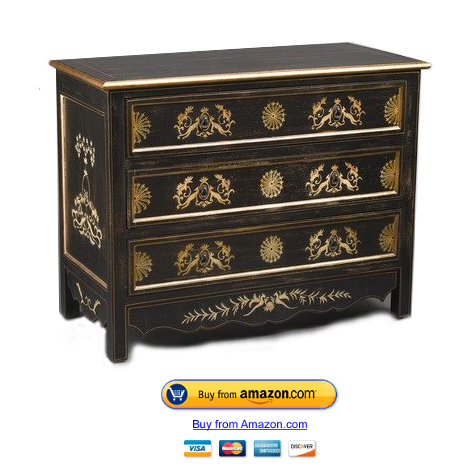 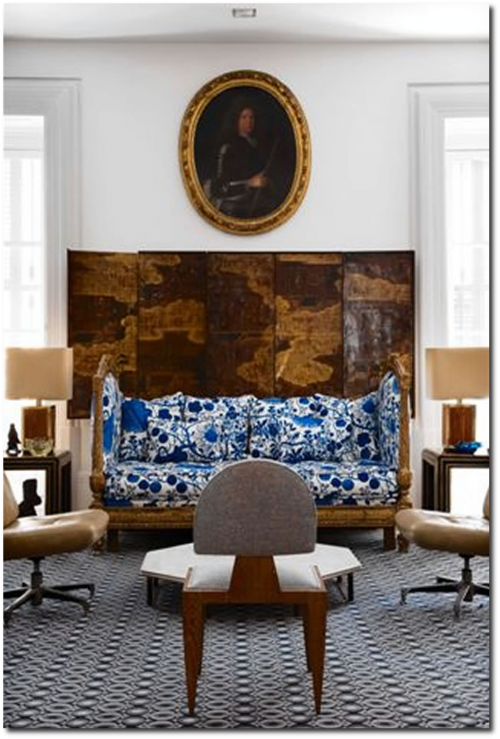 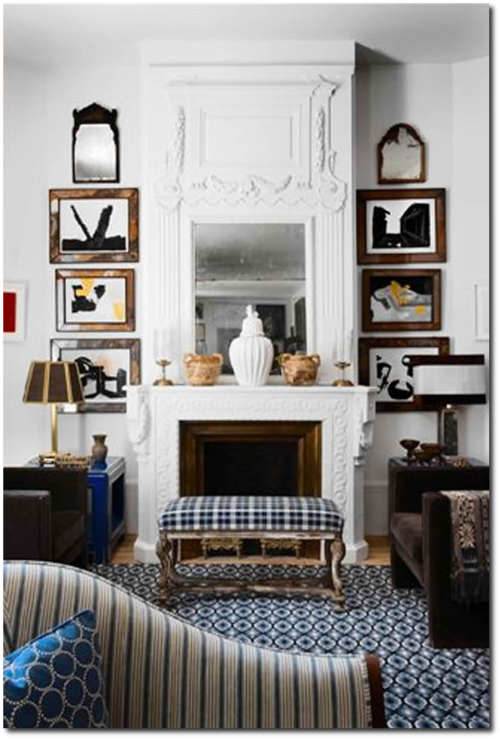 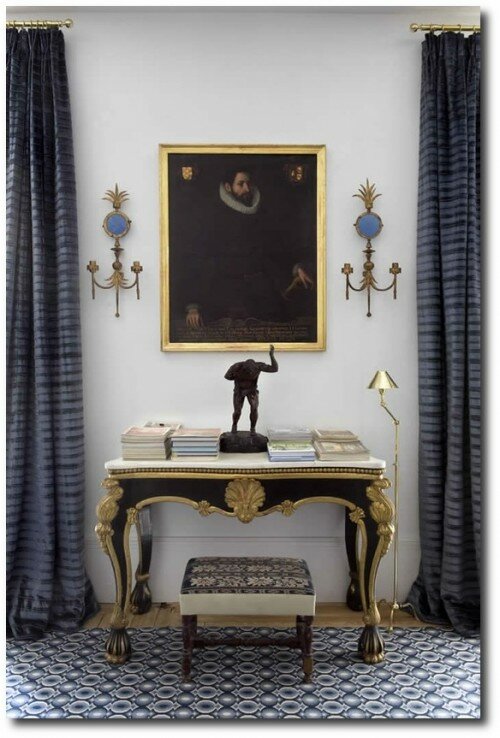 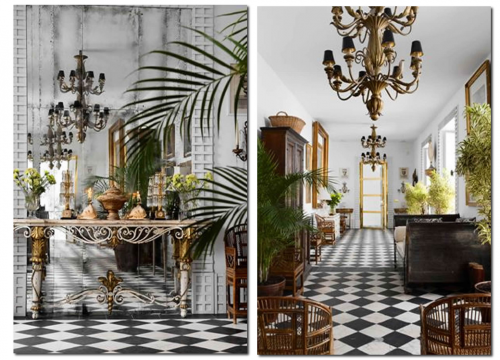 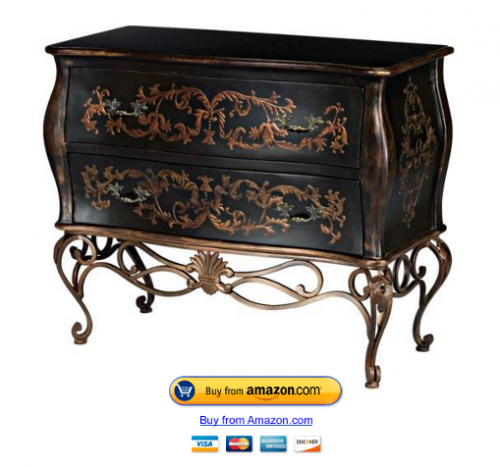 Black Bombe Chest On A Metal Base $593 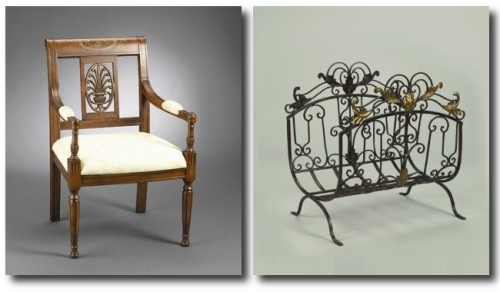 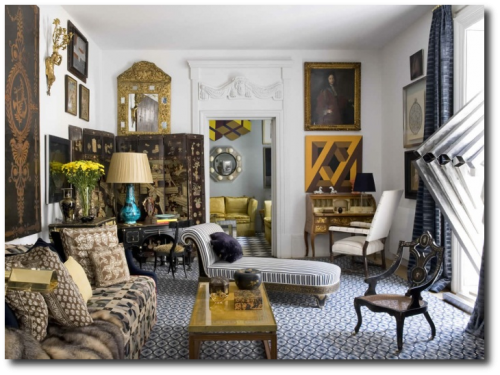 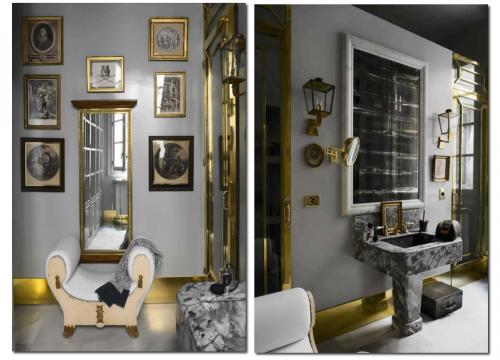 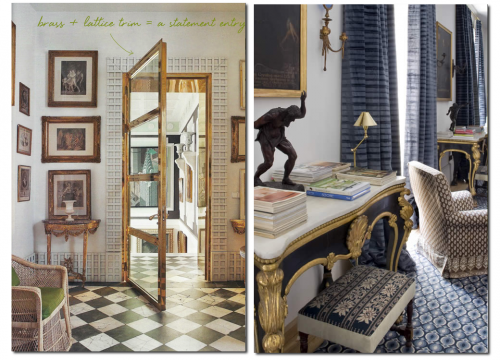 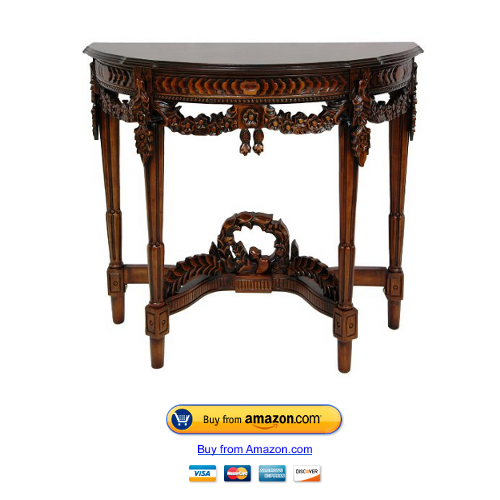 Get the Look of The Console Table Sitting On The Wall With this number from Oriental Furniture sells an outstanding demilune table for an outrageously low price of only $349. 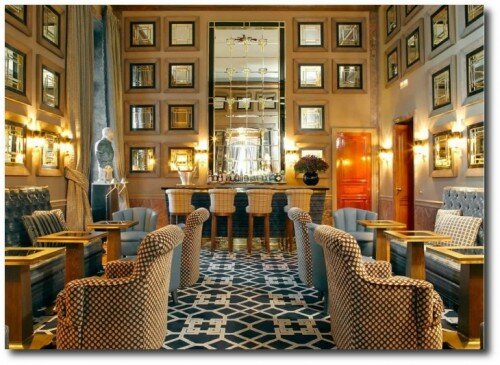 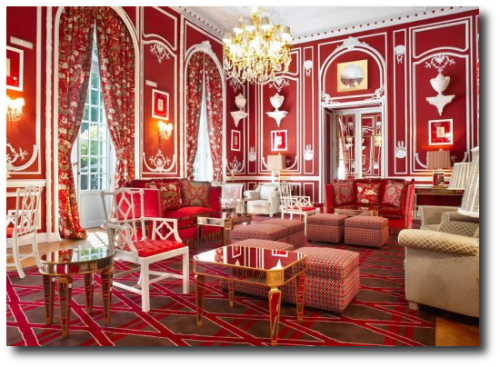 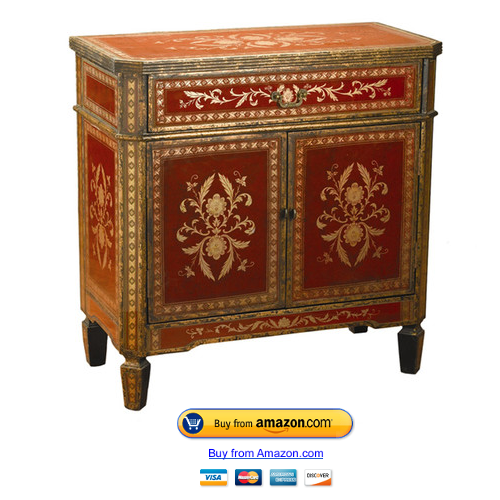 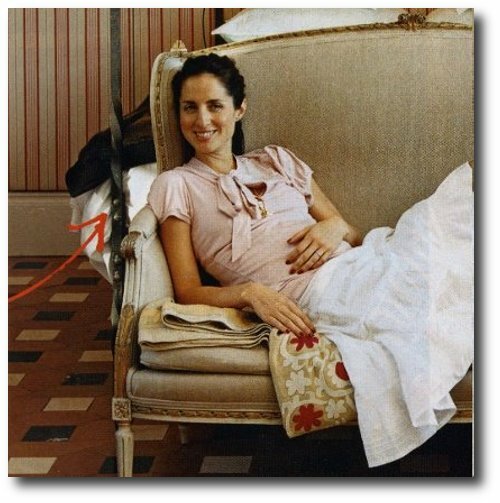 It’s been a few years since Carolina Herrera, Jr.’s home was featured in the pages of Domino, but the pictures of her home are still so current and breathtaking.

This beautiful Madrid home was photographed by Eric Cahan for Domino,
and was featured in the spring/summer 2005 issue. The striped walls, and use of patterned fabrics can be evidence that Carolina and her mom share not only the same name, but also a passion for lovely fabric, upholstered walls and stripes.

The bedroom shows red striped wallpaper and an iron canopy finished with a chocolate brown and white floral fabric topper.   The settee upholstered in a lovely gray linen, with a gray /white painted frame, with carved embellishments painted in gold. Contrasting is the floor which was featured in what looks to be black and white marble with a grid pattern in orange.

Picture Credits –Style Court, and MScott’s Photostream for such large pictures that we could finally view this terrific room! 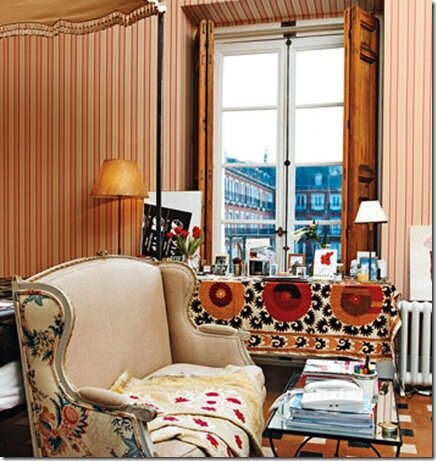 Another angle of this room 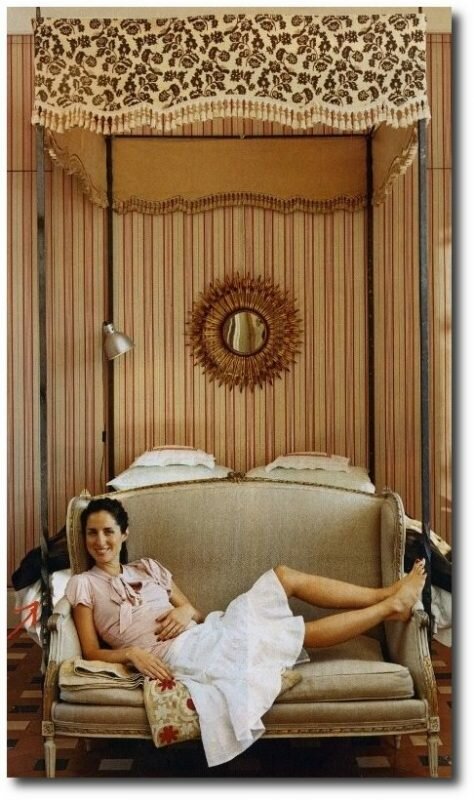 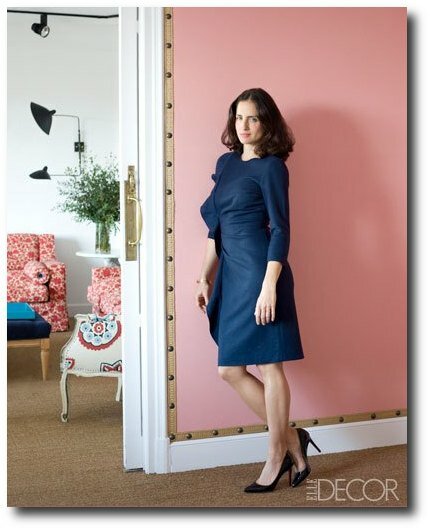 Herrera Baez in the study; the walls are covered in pink linen trimmed with jute ribbon.

“The dining room, with its soaring ceiling and French doors, does double duty as a library and home office. A dressing room contains an antique iron bed that allows it to function as a guest room when Herrera Baez’s sister, Patricia Lansing, comes to visit. Meanwhile, the kitchen was enlarged and transformed into a spacious family room that has become the central hub of the house.” 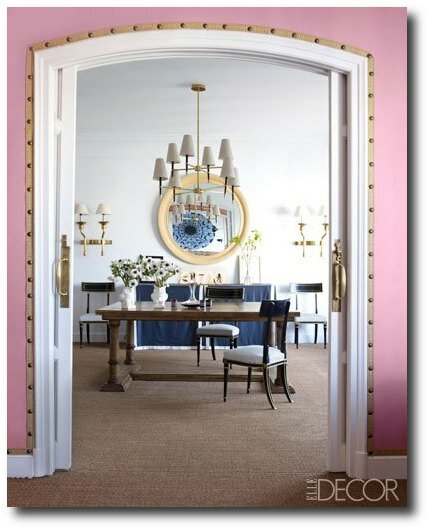 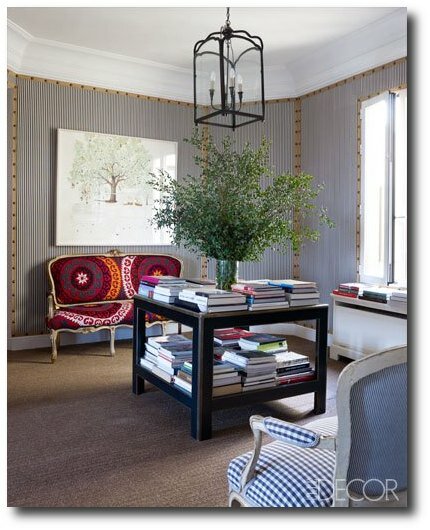 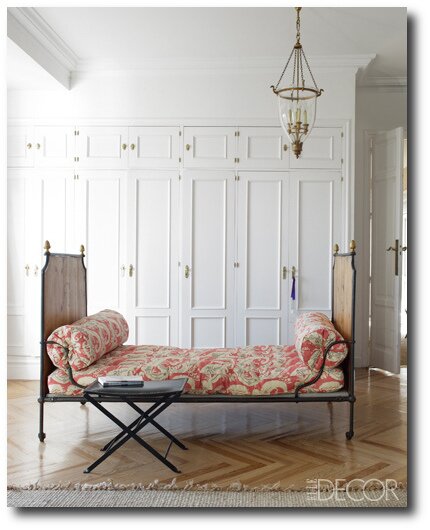 Carolina Herrera Baez at Home – ELLE DECOR
The cabinetry and herringbone floors in the family room are original to the apartment; a light fixture from Herrera Baez’s first Madrid apartment hangs above an iron-and-wood campaign bed, and the curtain fabric and stool are from Becara. 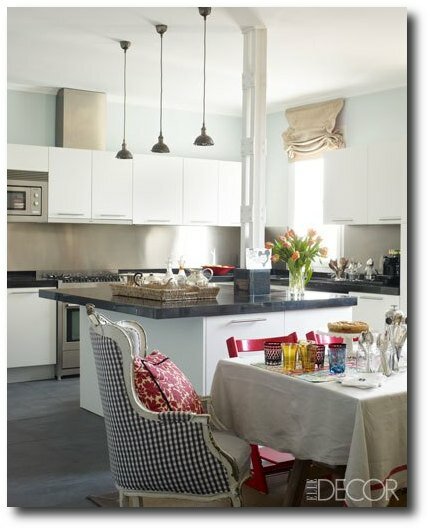 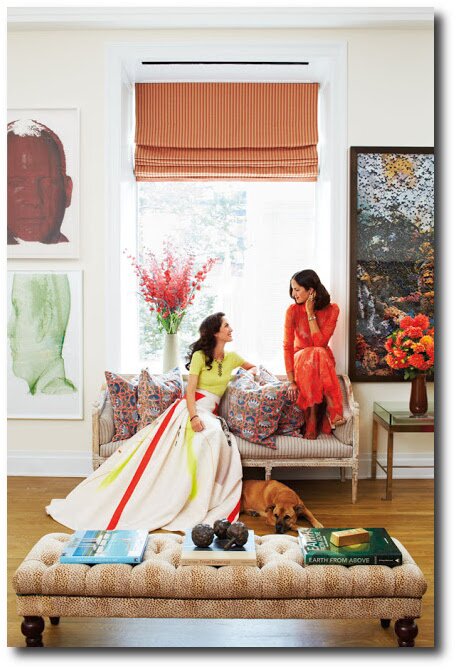 Although Patricia lives in New York and Carolina in Madrid, both sisters both work for their mother’s company.  Patricia is a creative consultant, while Carolina is the creative fragrance director.  Patricia Herrera Lansing grew up in an Upper East Side town house with her father, whom is also the Vanity Fair contributing editor. Although these ladies work worlds apart, they come together to work in such a creative way that makes this brand one of the most sought out in the world. 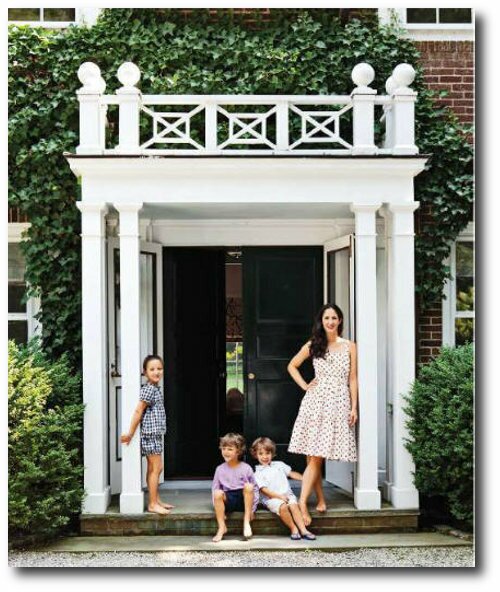