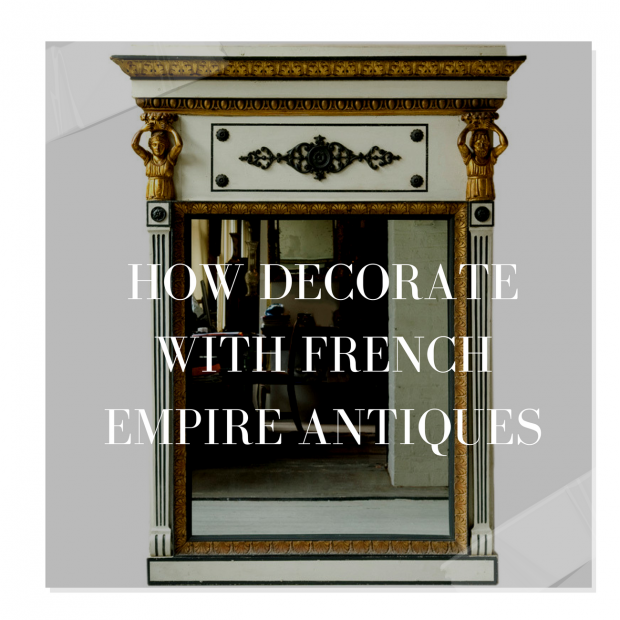 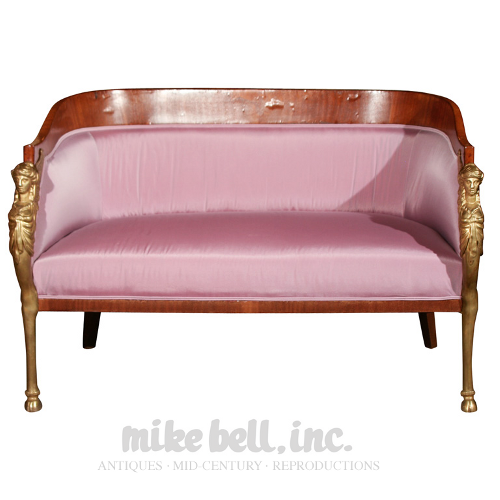 Throughout the early 19th century, the French Empire style ruled interior design. With colors ranging from soft to bold, this style is still suitable for many homes today. What Is French Empire Design?

The style originated from the time Napoleon I took leadership in the French state. The style corresponds to the Biedermeier styles in the German, and Scandinavian countries. At the same time, Federal style took hold in the United States and the Regency style was fashionable in Britain.

The Empire style, was the second phase of Neoclassicism in the early-19th-century. This movement became the dominant design style in architecture, furniture, accessories, and all other visual arts in France. The rest of Europe and the United States followed suit until around 1830. In the U.S. the style continued in popularity well past the mid-19th century.

The style elaborated on the Directoire style of the preceding period. Empire designs heavily influenced the American Federal style. General Bernadotte, who later become King Karl Johan of Sweden and Norway, introduced the Napoleonic style to Sweden, where it became known under his own name. Biedermeier furniture looks almost identical to the French Empire style, except the wood is blonde, instead of mahogany.  The mahogany woods tended to be more expensive to ship in, so they made the furniture out of the wood which was most commonly found in the region. In many instances, Biedermeier furniture also has a slight, yet distinguishable Scandinavian style compared to those found in France. The style became quite popular in the northern countries, and the Karl Johan style continued to be fashionable even after the the movement disappeared in other parts of Europe.

The Empire period was highly popularized by the designs of Percier and Fontaine, who were the architects for Malmaison.  The chateau was a country house about 12 km (7 mi) from Paris, and served as the the headquarters of the French government between 1800 to 1802. The house was purchased by Joséphine de Beauharnais in April 1799. At that time, Malmaison was a run down estate, with nearly 150 acres of woods and meadows. It has been said that Napoléon was furious that she paid well over 300,000 francs for the home, which needed extensive renovations. From 1803 until her death in 1814, Josephine cultivated nearly 200 new plants in France for the first time, and the property was most known for it’s rose gardens than for the interior of the house.

How You Can Get The Look

Empire designs drew heavily on symbols and ornaments borrowed from the ancient Greek and Roman empires. Ormolu details were hammered on to furniture and often made of bronze, and using special techniques, applied real gold to these embellishments.  Ormolu was thought to be the highest level of craftsmanship.

– Read about ” The Dirty History Of Ormolu” Hersite

– Check out my other blog Cabinet Hardware Ideas

-Get Ideas from my other blog Empire Furniture

2.  Incorporate Mahogany Furniture In To Your Design Scheme

Veneered furniture became the height of interior fashion during this time.  Mahogany furniture has still retained it’s value today, and can be very regal when stained with rich red stains.

Ebay, Amazon, Etsy, Ist Dibs, and Craigslist are great places to find antiques.  Empire furniture can be very costly depending on how rare the piece is, and where it was originally designed.

If you do find an inexpensive piece that you are willing to try fixing yourself, consider improving it by stripping the old stain off.  This will allow you to apply new stain which will make the piece appear more vibrant.  Paint stripper will allow you to remove the layers of stain.  All you need is stripper, heavy duty gloves, clear safety glasses, a scraper, and an industrial mask.   When most of the finish comes off, one simple trick I have used is to take hot water and a scour pad, and dish soap and clean the stripper away along with any left over residue. This helps to get grime out of the corners, and intricate areas of carving.  After allowing your piece to sit over night, give it a light sand with fine sanding paper.  Applying a new stain using minwax in shades such as “bombe mahogany“, “red chestnut“, or a pecan to give it an orange tint.  An application of polyurethane gloss or satin can be painted or sprayed on to complete the finish.

Later, we see French Empire styles drawing more on the bolder richer colors, while keeping the lighter shades found in the earlier styles, and using them sparingly.  Lighter tones were paired up with bolder, richer hues.   Some of the colors seen through this time frame were bright yellow, orchre and dark gold.  Hunter green and amethyst.  Reddish brown was used along with sky blue and coral.  Heavy, ornate furniture have always been the hallmarks of French Empire design, along with the punchy rich color schemes used through this time period.

How To Decorate With Bold Color

It is easy to be overwhelmed with the rich saturated shades found in the French Empire styles.   If you are inspired by this time period and want to work with the color schemes, here are a few things to keep in mind:

The easiest ways to pull off really rich shades on the wall is to work with wood floors, or natural fiber rugs. If you have wood floors, consider adding a simple stencil to the floor, combining a really light pine with a mahogany.  I find the lighter shades of gray and white look the best with really bright, vibrant shades on the wall.

– In this house, a music room is painted using white and beige –here

Another way to balance bold color is to stick to 3 shades in a room.  Perhaps two shades of the base color, and an accenting color often works nicely.  In addition, another trick is to use the same shade that is on the walls, and increase the vibrancy of the shade about 50% for the baseboards. White often tends to be too stark, while the same tone, with slightly bolder shade tends to allow the architectural details to pop in a delicate way.

In addition, adding coordinating art work on the walls is yet another way to balance rich shades.  Use antique gold, and cream with picture frames, and work with the really light grays to add architectural details in the room.  Adding in raw elements such as stone, marble, metal and wood can add warmth.

Upholster with vibrant fabrics such as silk.  If silk appears too rich, and you like the organic fabrics like I do, consider dupioni silk which often features really rich hues, such as canary yellow, vibrant reds and saturated greens.  The fabric has an organic feeling, and is often used in wedding gowns, and works beautifully for curtain fabric.  You can find it in very rich shades such as avocado, royal blue, cranberry, and other saturated shades.  Look at the wide selection on amazon

Trim on upholstery can be the finishing touches to an empire chair.  You can find a wide variety of gold trim on amazon that can go a long way to add detail to a set of drapes, upholstery, bed linens, pillow cases, frames and so on.

Here are some of my choices:

– This bullion fringe trim in gold would be a beautiful idea to update the bottom edge of a modern sofa.  Buy it on amazon for $4 here

– This chain pattern could nicely finish off the edging for drapes, or add boxy detail to a throw cushion, or chair –here

– Add easy detail by ironing these leaves on to lampshades, or throw pillows- here

– These circles can add a modern element to an interior- here 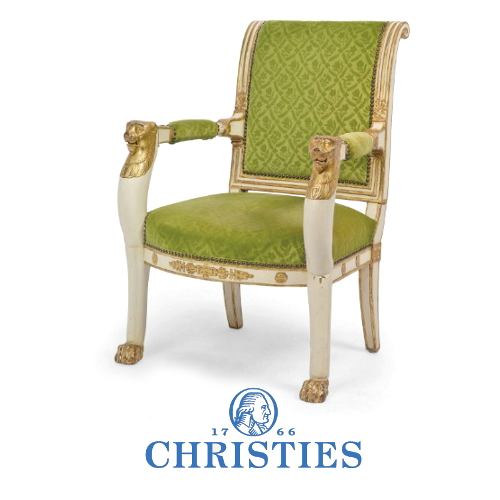 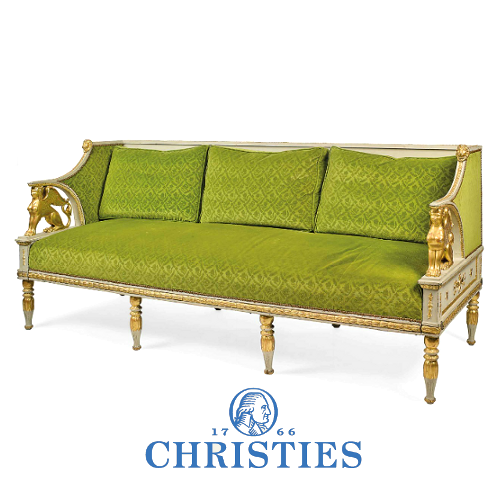 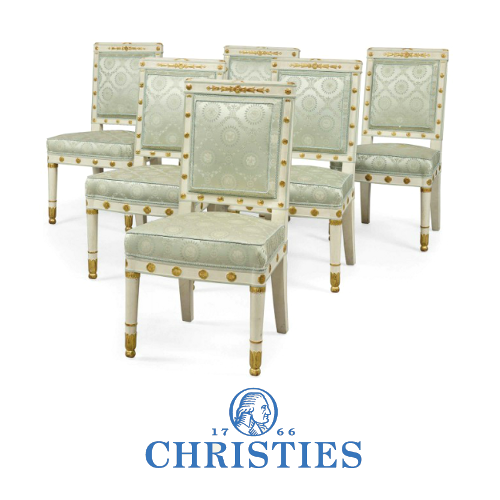 – When painting the style, I honestly think a person should stick to the colors of a historical palette.  You simply cannot go wrong with colors like black, white rich red, military blue.  Above is a historical chart that can give you some ideas of color examples.

All around, white is a great choice for Empire antiques.  The details can be highlighted with gold, or gray. Here are a couple of rich examples of white painted detail on empire furnishings.

Here is one example

– Don’t Use Heavy Distressing- You won’t find too many shabby styled Empire antiques.  The style is often featured with rich fabrics, accented with gold paint, and not really a style that should feature a lot of distressing at all.

– Replacing The Hardware With Glass Handles- I am guilty of this myself.  I once took a really pretty Empire chest that had the rich veneer and painted it, and drilled new holes for hardware.  Oh, it could have been so much better if I left it alone.  If the chest has rich veneer, try to fix the veneer, and keep the original period style hardware.  Work with hardware that is historical to the period. Some of the American Empire chests often feature wood handles, these could be painted, or replaced with over-sized round pulls, or lion pulls.

Empire antiques can really make a room look sumptuous and grand.  You cannot go wrong with this style. 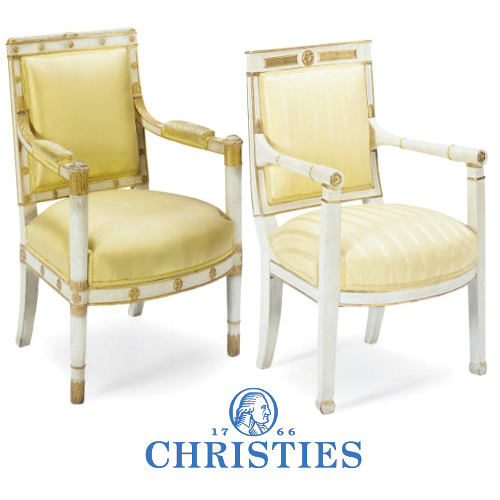 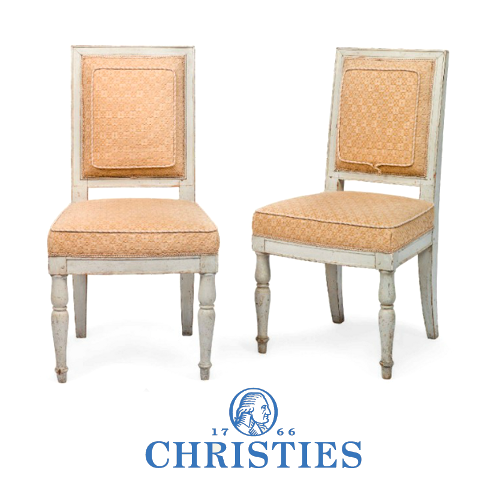