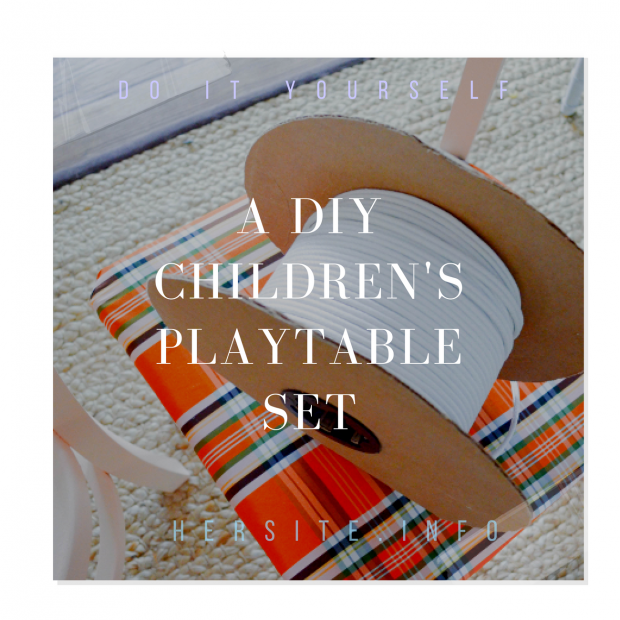 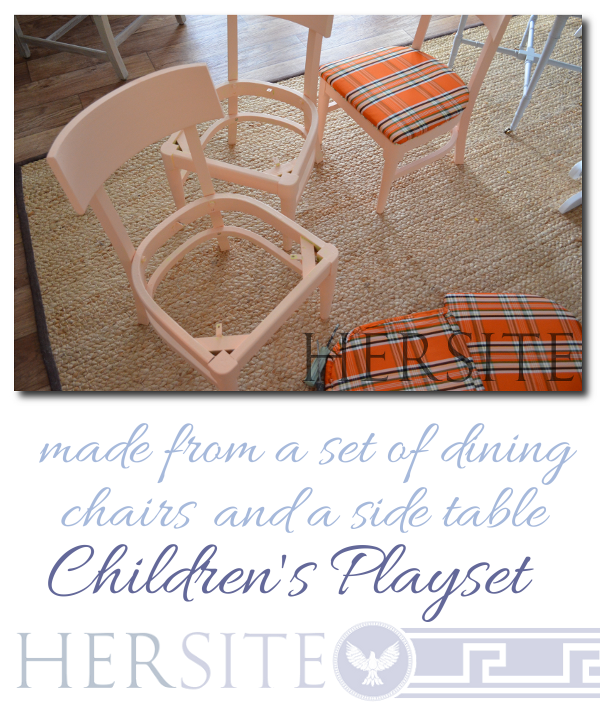 You might look at dining chairs and end tables a bit different the next time you run across a set at your local second hand store after viewing this post.

I re-purposed an old set of chairs, and an end table which my daughter can some day use as a play table.  Later, I will show in a different post what I did with another living room end table to house my daughter’s toys.

I came across a set of three chairs at our local second hand store. The back of the chairs had been designed where the wood was cut at an angle, fitting into the classic looks found in the mid century modern styles from the 50’s. I squared off the backs with a hand saw and cut off the legs to instantly update them. Vintage chairs (sometimes) happen to be smaller than your average dining chairs, making the actual seat of the chair a good size for a kid.

After re-sizing them, I painted them in yellow, and they were completed, but this year I wanted to update them with some bright orange silk tartan organza that I had been saving.

One of the best investments I have made was a Self-Healing Rotary Mat, and cutter From Olfa.

I took a box cushion class offered by a local fabric store in Seattle several years ago, and buying one of these mats and cutter was a requirement to attend the class.  I thought it was a waste of money, but as I started using it, it has become a necessity in all my sewing projects.

It has allowed me to cut perfect straight lines, and has come in handy when cutting large pieces of fabric.  My only regret was buying one of the smaller size mats.  If you purchase one, buy a larger mat, as you will thank yourself for it.

To finish off the bottom part of my chairs, I used cording covered in fabric, which was then stapled to the bottom wooden part of the seat.

I bought a 250 yard spool from Rochford Supply which turned out to be the best deal after looking on ebay.  So far to date, I am now on my second spool.  I purchased the double welt cord spool, and cut the cord in half if I just need a single cord for anything other than upholstery like pillows.

The double welt cord is great for finishing off upholstery, and the single for pillow trim, slipcovers, coats, dresses and so forth.

In this picture, I have shown the double welted foot.  You can run the cording through the machine quickly with this foot.

When buying welting cord, you will need two attachments for your sewing machine.

The first one allows you to sew a double welt cord, and another to sew a stitch which butts up against your single welted design.

You can see the single foot, which was used to sew my slipcovers.

I purchased my welting cord attachments on ebay. Often times if you have a sewing machine store near you, they may not carry the right foot for your machine.  My machine is older, so I have to look on ebay for all my attachments.

After sewing my single welt cord, I run my cords through the serger.

When I go to make my slipcovers, or pillows,  I serge all the individual pieces before sewing them all together.  If you do it at the end, the layers become too bulky to go through the machine.  Also when all the serged seams line up, it gives me a guide I can follow as I run them through my machine.

I have went through several Porter- Cable Compressors since learning how to upholster.  I have found they work well enough, until they don’t shut off.  They are very inexpensive, at only $120 dollars, but after my last one wouldn’t shut off, I decided to upgrade and work with a different brand.  I since have bought a 20 g Husky compressor from Home Depot, and find I only have to fill it up once for most of my projects.  For painting projects, it works FAR better than a smaller compressor.  I am happy with Husky, and choose to go with their brand for most of my buys.

Here is my table last year painted in yellow

Here is my table set completed.  The end table was heightened with added wheels, and stripped of it’s paint.  I wanted to keep the natural wood, which provides a nice contrast for my blue painted deck.  In addition my daughters room is in pine, so some day when I bring it into her room, it will nicely work with her existing furniture.  End tables make perfect kids tables.  What do you think? 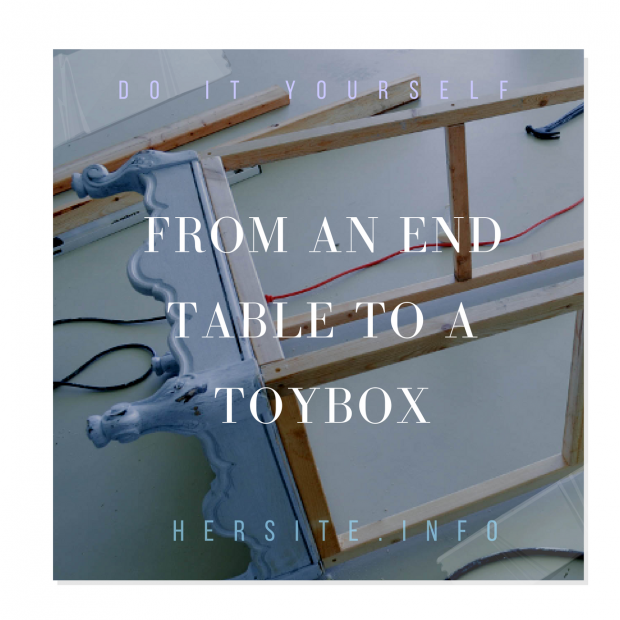 I spotted a French Provincial end table on our local buy and sell facebook group that I scored for $20 dollars. Originally I wanted to make a lego table with a pull out box, but changed my mind, as I needed a functional piece to organize my daughter’s toys.

I cut the table in half with a hand saw, using only the bottom, and the top piece. Everything in between was discarded. I originally had in mind several shelves, which could work like over-sized shelving that could sit in her room. The trouble was, once it was built, it looked too big in her bedroom. We barely got it into the living room, before the design had to change.

In the end, I was able to make two shelves out of my hard work. One for our outside patio, and one which sits in our living room.

Today it holds toys, which hopefully will go a long way of keeping the house clean while having toys within her reach. What do you think? Would you have this in your home?

How I Dressed Up An Ordinary Tack Board

I needed some organization badly around my desk, but because my office is right in our livingroom, it needed to blend in to the living room and not look out of place. So I decided to upholster my tack board. I have used painters drop cloth for pretty much everything in my home, and using it for my tack board just seemed to work well.

You can see in other photos below I dressed up an old frame that was a piece of art by covering it with cloth. I simply used brass hooks to hold my necklaces up in my closet. Its such a thrifty idea that cost me next to nothing. I just had to go shopping in my own home!

What do you think? Would you display your jewelry like this in your bedroom? See the pictures below

Here is a picture of the tack boards by my desk. They look great! Ready to be filled with notes