I don’t think anyone will forget the beautiful Mary Elizabeth alongside Kevin Costner in the 1991 film Robyn Hood in Prince of Thieves. Many brides are looking towards themed weddings as they are entirely different than the typical wedding party. Renaissance, Elizabethan, Tudor, Celtic and Medieval weddings ALL evoke feelings of romance, family, friends and simplistic happiness. Renaissance brides are often featured wearing flowing creamy gowns encrusted with large jewels and sashes. Crowns can be made of tree branches or chunky metal with cabochon cut stones and pearls.

The Renaissance period ran roughly from the 14th to the 17th century, beginning in Italy in the Late Middle Ages and later spreading to the rest of Europe. The fashions of the Renaissance were based on Spanish styles, such as black on white embroidery. 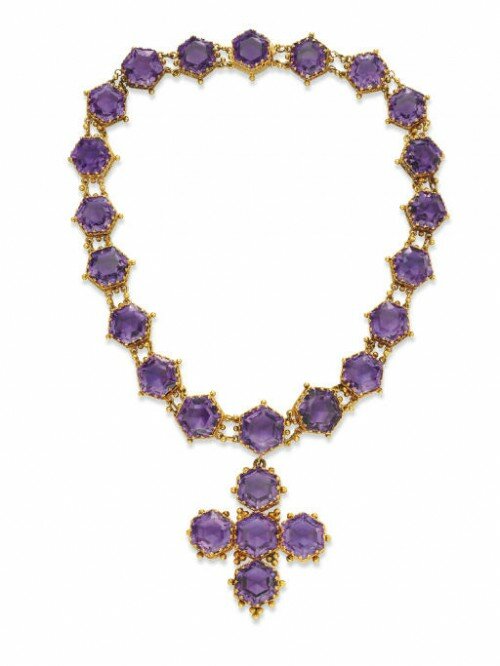 An Antique Amethyst Pendant Necklace – Sold at Christie’s New York in October 2007 for $15,000

Women’s undergarments were just as important as the outer dress. To distinguish social status all one had to do is look at the head dress and footwear. Women’s hair and head dresses during this time period were designed to be quite elaborate.

A high forehead was considered to be very beautiful, so much so, that women would spend time plucking their hair from their foreheads and side of their face to achieve a high forehead, which was considered quite fashionable during the Renaissance. They pulled the remaining hair into a tight bun or braid and then covered their heads with veils which was always elaborately decorated with jewels, embroidery and rich fabrics.

Later on in the Renaissance, Venetian women would arrange their hair into twin buns at the front of their head, much like you saw with Princess Leia in Star Wars. Tighter buns were fashionable, and a narrow bands which were worn around the head to keep hair in place.

Women’s hair and head dress during the Renaissance was quite influential in determining their social status, much more than today when almost anything goes. Women spent a lot of time arranging their hair and making their head dresses to stay current and fashionable. If you look through the paintings during the Renaissance, you will find that women during this time paid attention to their hair and it was considered to be quite important. A Renaissance style wedding look would be quite unique to do for a wedding. Focus on ornate jewelry with a mix of pearls and stones. Look at my suggestions below.

Build your wedding dress from pieces that already look antique and old.  Adding custom pearls and rhinestones onto an existing cotton dress could be a way of getting that really old Renaissance look.

The renaissance is considered one of the most romantic periods in history following the Middle Ages in the 16th century. Many people are drawn to this period in history because they feel a draw to a more simplistic time and approach to life.

The renaissance bridal theme would not be complete without the proper food. Seating guests at long rectangular tables is historically more accurate than the round tables we see today at weddings. Dining by candle light and eating on solid wood tables or rectangular tables fashioned with old fashioned wine goblets surrounded by cascading tree vines would all evoke the feeling of unity and family bonds.

Renaissance gowns are are frequently made of lavish silks with beautifully colored robes being worn over them. Embroidery and draped chiffon wedding gowns with empire waist lines are also a throw back to 16th century bridal looks. Crowns are often quite chunky with solid metal.

In the 16th century most gems were not cut as intricately as they are today. Most stones were cut in a cabochon style which looked much like a smooth gem with a rounded top, or table-cut which was a cabochon cut with the top cut off, creating a flat surface.

Most stones had an oval or square shape to them. For very hard stones, like diamonds, a pyramid-cut which created a pointed gem was used. Later in the century the hog-back cut was invented (beveling the table-cut gem around the edges to create what we consider the classic “emerald” cut), and around 1600 the rose-cut, which made gems glitter and sparkle more